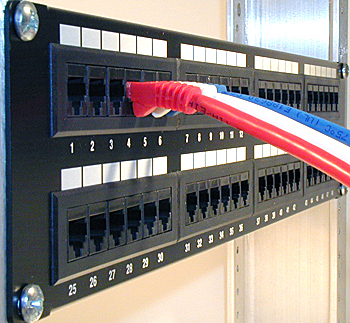 Author: Toronto-Cable Tags: There is no tags Comments: 0
Share:

A Network patch panel is commonly a 24 Port 1-U Flat device which can connect up to 24 patch cords (from the network equipment switch) from the front and 24 permanent Cat6 network cables (from computers and other network devices) from behind.   A Network patch panel is generally a rack mountable device and it is mounted on the rack along with other network devices. The network switches are not connected directly to the computers, as per the structured cabling standard. The switch ports are connected to patch panels through patch cords and the patch panels are hard-wired to the longer cables that come from each computer/ network equipment device (from behind).

This design allows a permanent connection for the longer cables from computers and other networking equipments. Since the longer cables are not disturbed during any network adds/ moves and changes, they give a longer life to the cables and the cables need not be changed frequently. Patch panels do not disturb permanent connections on the network switch ports, as well.

Since the patch cords are going to be used for frequent connections/ disconnections,  adds/ moves and changes, they can be replaced even if they become faulty due to excessive handling. The fact that they are pretty inexpensive makes it even easier for network managers to replace them without having to replace the more expensive permanent network equipment cables. The patch panel design enable the replacement of patch cords instead of the permanent cables.

Patch panels are very useful for testing cable connectivity and identifying if the fault is on the network side or the switch side. They are used for monitoring the network and also interconnecting various devices. Labels can be marked over each port of the patch panel indicating which device/ switch port it connects to.

/// There are no comments yet, but you can be the first

Find out what's happening, right now, with the people and organizations you care about.